skip to main | skip to sidebar

Now I introduce the mysterious pink thing photographed during cast-on by Kate at the Harlot event. It's Elsebeth Lavold's "Gyrid", from the Viking Knits Collection Volume 1. It's meant to be a tank but I plan to knit a short sleeve, baste it in, and check whether I like it that way better. Tanks and me are not always compatible. 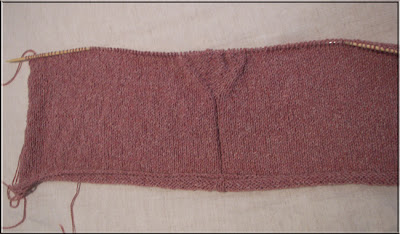 I know there's not much to see here - plus the light yesterday was dreadful and it doesn't look its best - but I have finished the back, and am 1/4 of the way through the chart on the front. I like how the Silky Wool is knitting up - nice and drapey. It's a bit on the thin side; now I know why the model picture has a discernible bra line. The thinness should make for a comfortable and flattering top, though - as Juno says, "The bigger the bust, the thinner the yarn."

And, a little picture from knit night the other day. I had a few shots of people, but I thought this one captured the mood better. 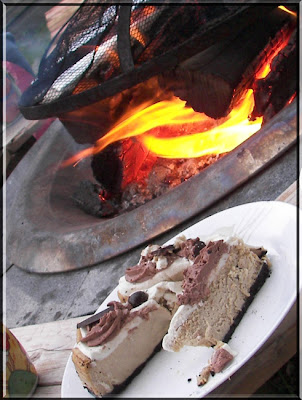 Hi Shan: I am also knitting an Elsebeth pattern - you can see them on my blog. I love the Silky Wool, but it makes me itch! I have some in a beautiful turquoise and I had to frog it from another Elsebeth knit - I will make a nice vest from it, cause I am okay if I have something under the wool! I may have to double the yarn, but we shall see! First I want to finish Audrey!

Me again - thanks for visiting the blog. You are right about the weather - where is our summer?

Your Esbeth Lavold tank top is progressing beautifully. I really love her patterns, but I wish I could purchase them individually rather than the entire book. I am usually captivated by one or two designs, and the rest I find completely unsuited for me. I can't wait to see your experimentation with the additional sleeves.

I forgot to tell you, I was so taken by the yummy cake and the warm fire, thanks for the guess on the upside down laundry basket! Your guess was among the most creative. However, Aquarela came the closest and wins this time.